From Field to Pilgrimage Site 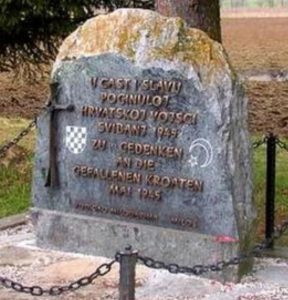 Memorial stone at Loibach Field/Libuško polje in 1987; the picture shows the stone in its original design (coat of arms still white-black), also the memorial site is not yet built (stage, cemetery; Source: private, 1987).

In a field near Bleiburg/Pliberk in the southeast of Carinthia/Koroška, near the border with the former Yugoslavia, the British army handed over escaping Ustaša to the Yugoslav People’s Liberation Army. “Bleiburg” symbolizes several places where unconditional surrenders took place. On the Austrian side of the border it was also possible for exiled Ustaša and former soldiers of the NDH to hold meetings after 1945. On All Saints Day in 1952 a first memorial service took place at the cemetery of Unterloibach/Spodnje Libuče, near the town of Bleiburg/Pliberk (see Čvrljak 2015). The Loibach Field/Libuško polje was at that time really only a field, nothing more. In 1965, an initial plot of land was purchased from farmers from Bleiburg, and from then on, commemorations were also held there (see Pavlaković 2008).

On the occasion of 40 years “Bleiburg” there was an initiative to erect a memorial stone on the field. The Austrian authorities completely rejected a monument at first (mainly for reasons of foreign policy). After a year, they gave their consent on the condition that the monument cannot commemorate the “Croatian Army”, which also inevitably would include the (Waffen-) SS, the Ustaša and the Croatian Home Guard (Domobrani). The memorial erected in 1987 thus had a bilingual inscription, but the inscriptions are not equal in content: “U ČAST I SLAVU / POGINULOJ / HRVATSKOJ VOJSCI / SVIBANJ 1945 / ZUM GEDENKEN / AN DIE/ GEFALLENEN KROATEN / MAI 1945.” (IN MEMORY / OF THE / FALLEN CROATS / MAY 1945). The literal translation of the Croatian inscription, however, reads: “To Glory and Honor / the fallen / Croatian Army.” To the left of the inscription a Christian cross made of metal is embedded, and additionally a crescent moon with a star on the right (as a reference to Ustaša soldiers of Muslim faith, and those within the 13th Waffen-SS-Division Handschar). Furthermore, to the left of the inscription, the Croatian coat of arms of the NDH state (chessboard pattern starting with white) was engraved.

In 1995, another memorial plaque was erected by the “Brotherhood of the Croatian Dragon” (“Družba Braća Hrvatskoga Zmaja”). It is a nationalist secret society, founded in 1905 whose reputation became better in 1941 during & by the fascist NDH state, then it was banned in socialist Yugoslavia in 1946 and re- established itself in 1990. This memorial plaque commemorates “the victims of the Way of the Cross, which began here on May 15th, 1945,” and the “sons and daughters,” who “suffered death because they loved their people and their homeland” (own translation).

In November 2003, the whole memorial was to be expanded. Donations mainly came from the HDZ-led Croatian government. In total, it donated 125,000 EUR for the purchase of additional land and remodeling of the memorial site (see Čvrljak 2015 and Kolstø 2010). The project was rejected by the Austrian authorities, in particular the mayor of Bleiburg, with reference to the historical revisionism of the celebration and the danger of “neo-Nazi meetings”. However, the board of the “Bleiburger Ehrenzug” got support from within the Catholic Church, the Austrian Federal Government (at the time a coalition of ÖVP-BZÖ) and the Carinthian Provincial Government, whose governor at the time was Jörg Haider. A permit was issued in March 2004 and remodeling began in June 2004. 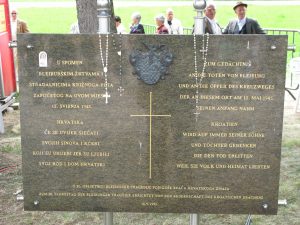 Commemorative plaque of the “Brotherhood of the Croatian Dragon” erected in 1995 at Loibach Field/Libuško polje in memory of the “dead of Bleiburg and to the victims of the Way of the Cross” (Source: AK Bleiburg/Pliberk, 2008).

One step forward and two step back

In order to get the desired massive expansion and remodeling of the memorial approved, which would include parking space, a frame of the monument as well as stands forwreaths, and after (soft) media criticism of the inscription, a change of the inscription text was agreed upon with the authorities. As of April 25th, 2005 the monument on (brief) display read: “U SPOMEN / NA NEDUŽNE ŽRTVE / BLEIBURŠKE TRAGEDIJE / ZUM GEDENKEN / AN DIE UNSCHULDIGEN OPFER / DER BLEIBURGER TRAGÖDIE.” (“In memory / of the innocent victims / of the tragedy of Bleiburg”) At the same time, the surface of the Croatian chessboard pattern was painted in white-red (before that the red fields were not filled with color), so that now clearly the coat of arms of the NDH state and the 13th SS Division could be discerned.

Maybe already in 2007, at the latest in 2008, the inscription was changed back, after criticism from Croatia and the exile communities. Since then and until today the version of the inscription from the 1980s can be read on the memorial, which commemorates the Croatian army in the passage written in Croatian.

However, the chessboard pattern to the left of the inscription was not changed again, the coat of arms of the Ustaša state remains to be seen. In addition, a fixed stage with altar and lectern was built on the newly acquired land around the monument in 2006/2007.

The complete remodeling of the memorial site will also include a military cemetery which is to be built on the land. The goal seems to be a consolidation of the myth of the “tragedy of Bleiburg” by means of buried bones, which, however, would have to be brought there first. Construction started in 2013. The Austrian authorities were informed of the plan for an enclosure for the first time in 2010. According to media reports, the Municipality of Bleiburg/ Pliberk and the District Commissioner of Völkermarkt/Velikovec asserted that the project had been stopped and that permissions for dedicated use of the land had already been withdrawn. Carinthia’s Catholic Church insists that they would not agree to an ossuary being built. In May 2017, Wolfgang Sobotka (ÖVP), then Interior Minister, responded to a parliamentary inquiry that there was no request for exhumation and reburial (see Parlament. gv.at 2017). Since then, everything seems to have gotten quiet - but the probability of initially everyone being against the cemetery and in the end no one doing anything against it is very high. 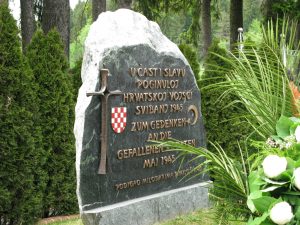 Memorial stone after the text had been changed back; Coat of arms beginning with white, Cro- atian text with reference to the Croatian army. (Source: AK Bleiburg/Pliberk, 2008).