The Myth of Bleiburg 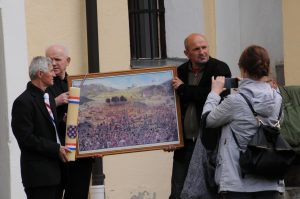 Reactionaries of all stripes gather each year at the memorial on the Loibach Field/ Libuško polje. They all commemorate a tragedy that, as it is portrayed, never took place: an alleged massacre on the field. As has been clarified in the previous text, there was never a massacre at Loibach Field/ Libuško polje. The only events with proof of occurrence are deaths and injuries in the last battles of May 14th & 15th, 1945 around Bleiburg/Pliberk and various suicides at Loibach Field/Libuško polje, for example the suicide of Ustaša general Tomislav Rolf. Nevertheless the myth continues to live on in the historical revisionist consciousness. It represents a central point of reference for Croatian nationalism and neo-fascism.

The central element of the myth is a painted picture of unknown date, which is showcased every year at the beginning of the procession to Loibach Field/ Libuško polje. It shows refugee Croatians surrounded by Partisans. A British fighter aircraft flies above them, British soldiers watch the scenery idly and the soil appears to be soaked in blood. The victim staging is perfected here: the heroic Croatian people, betrayed by the British army, are massacred by the cruel Partisans. The trees at the Loibach Field/Libuško polje are also depicted in the painting, although they did not exist in their present form in 1945. The myth of the massacre was mainly cultivated by publications from Croatian exile communities after 1945 (see Dietrich 2008). As mentioned before in the public of socialist Yugoslavia, on the other hand, the only official commemoration was that of the anti-fascist struggle for freedom (see Radonić 2008). Under Franjo Tuđman, the myth was established in the Croatian national narrative starting in 1990 and came to support the state, made possible by the increased involvement of Croatian exile communities and their narratives of the events. In 1990, the taboo prevailing during the Yugoslav era was broken with a first report by the massively advertised and attended memorial service. The first, distanced report of the memorial service in the state newspaper Vjesnik mentioned “a few hundred citizens from exile and from Croatia”, while in 1991 they already spoke about 1,100 and by 1993 of several thousand visitors. As early as 1992, a delegation from the Croatian Parliament was represented in Bleiburg/Pliberk, headed by Vice- President Vukojević, the history revisionist commission for recording war and post-war victims, as well as delegations from the HDZ and the HOP (“Hrvatski oslobodilački pokret”) which was founded by Ustaša leader Pavelić while living in exile. While in 1990 the first cautious Vjesnik article mentions the “so-called tragedy of Bleiburg” (see Radonić 2010), as early as 1992 a member of the Ustaša organization HOP emphasized that Bleiburg was “just the beginning of the most terrible genocide in the history of the Croatian people” (see Radonić 2010), while a 1993 report speaks of “one of the most tragic dates in the recent history of the Croatian people” or rather the “biggest tragedy in recent Croatian history” (see Radonić 2010). This makes the “Croatian people” protagonists and equates them with the Ustaša, Croatian Home Guard (Domobrani) and civilians killed in 1945. That many Croatians fought against the NDH regime - and in fact to a very significant extent, unlike in Austria - is thereby obscured. In 1995, the Croatian parliament took over the patronage of the memorial in Bleiburg/Pliberk, for the first time there was a live television broadcast and Tuđman extended the commemoration to a commemoration of all those that fell for Croatia in the Croatian War of Independence (1991-1995). 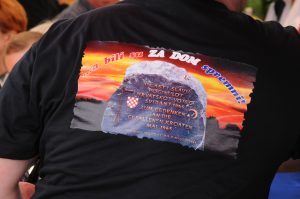 Religious romanticization of the myth

In the characterization of events, the frequent use of religious terms is striking. The term “Way of the Cross” has been used by the longtime exile participants of the commemorative event for the marches, which started in Bleiburg/Pliberk. From the very beginning since reporting started, the term was adopted. The President of Parliament spoke at the commemoration session in the Parliament in 1995 of the “tragedy of Bleiburg and the Golgotha-like Way of the Cross” or a “national Golgotha” (see Radonić 2010). The escape towards Bleiburg is referred to as the “great exodus of the Croatian people” (see Radonić 2010). Apart from the religious collective symbols, terms are also used that seek to be equated with the fate of Jews, such as the “column of death” (see Radonić 2010). The first Bleiburg memorial service in Sarajevo explicitly mentions “death marches” (see Radonić 2010).

The events around Bleiburg/Pliberk are thus equated with the exodus of the “chosen people”, with the sacrifice of Jesus for the sins of mankind, with the marches in the final phase of the Nazi regime and finally with concentration camps and the Holocaust itself. The “Croatian people” are on the one hand compared with the persecuted Jews. On the other hand, Bleiburg is interpreted as a collective Jesus- like sacrifice for the Croatian resurrection in the form of statehood. The history of the Second World War was so distorted that Bleiburg was interpreted as a crime on the “Croatian nation”.

In the Tuđman era from 1990 onwards, the Yugoslavian commemoration policy shifted in favor of the myth of Bleiburg: the commemorations of the Jasenovac concentration camp and the alleged events in Bleiburg/Pliberk are equated, thus relativizing the Holocaust and the genocide of Serbs and Roma_Romnja. After Tuđman’s death in 1999 and the demise of the HDZ in 2000, there was a break with the revisionist policy of the Tuđman era regarding Jasenovac, while initially the national commemoration in Bleiburg/ Pliberk continued unchanged. This period is marked by the attempt to demand the same attention for Jasenovac as for Bleiburg. The revisionism in relation to the Ustaša crimes is no longer only addressed by marginalized agents, but also by the president. President Stjepan Mesić’s condemnation of all crimes committed in the name of the Croatian state, which took place in 2003, can be described as a turning point in the discourse. The HDZ, reformed by Ivo Sanader, after their election victory in 2003, against their own clientele, implemented the removal of Ustaša monuments and the renaming of streets that were named after the Ustaša Minister Mile Budak. Sanader no longer spoke of Bleiburg in Jasenovac and, like Mesić, condemned Ustaša crimes. However, he persistently condemned the crimes of “black and red totalitarianism” and relativized the Ustaša crimes by referencing the socialist ones. He also regularly linked Jasenovac’s teachings to the 1990s “Homeland War”, thus replacing the “old” national victim myth about the “Croatian tragedy” of Bleiburg with a new myth according to which “the Croats” had become victims of a “new fascism” in the 1990s.

After the electoral victory of the Social Democrat-led coalition in 2011, the patronage of the Parliament for the memorial service in Bleiburg/Pliberk was terminated. But with the victory of the HDZ presidential candidate Kolinda Grabar-Kitarović in the elections of 2015 and especially the HDZ-led coalition in the parliamentary elections in the same year - and the re-election of 2016 - a revival of the Bleiburg commemoration can be observed, including renewed parliamentary patronage. Although the meaning attributed to this mythical place depends heavily on the government, it seems to remain inseparably connected to the Croatian national identity. The terms “Way of the Cross” and “death marches” are so widespread in Croatia that even in critical texts about the commemoration culture in Bleiburg/Pliberk they are used without being questioned.